I was looking at the Premier League table as I was preparing for New Years celebrations and had to stop suddenly without spilling my beer. I noticed something odd in the middle of the table:

Yes, Newcastle United, whose fans probably hate their club’s owner more than any other fanbase (aside from maybe Manchester United fans). Newcastle, who let one of the best managers in world football, Rafael Benitez, walk last summer after he put in some of his best work, keeping the club from being relegated (again). The Magpies, who were expected to be in a relegation battle royale this campaign, are in 11th place in the table as 2019 closes.

After a 1-0 loss at Chelsea on October 19th, Newcastle had earned eight points in their first nine matches and were sitting in the relegation zone. Since the start of November, the Magpies have had wins against West Ham, Bournemouth, Sheffield United, Southampton, and Crystal Palace. They also managed to draw against Wolves and Manchester City.

Going into the festive period, Newcastle sat in 9th place in the table. Then reality set in leading to an away loss at Old Trafford and at home to an Everton team seeking a new manager bump. 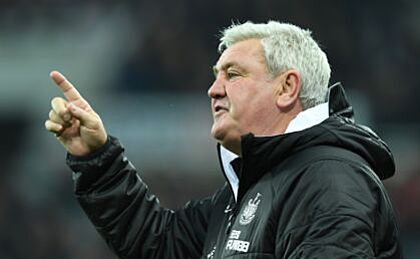 NEWCASTLE UPON TYNE, ENGLAND – DECEMBER 21: Steve Bruce, manager of Newcastle United gestures on the side line during the Premier League match between Newcastle United and Crystal Palace at St. James Park on December 21, 2019 in Newcastle upon Tyne, United Kingdom. (Photo by Mark Runnacles/Getty Images)

Despite this, they sit in 11th in the table and six points clear of the drop as the ball drops on the start of 2020. However, the forecast for the near future is as dark as a David Lynch movie.

Per fbref.com, the Magpies are ranked as follows in the following categories (out of 20 teams):

Newcastle’s next three matches are against Leicester City, Wolves, and Chelsea, which suggests that a team that already struggles for goals will be hurting even more for an offensive output. Manager Steve Bruce, who is an experienced English professional manager, has done a solid job so far with a squad he had to hastily pull together.

Tactically, he has pushed most of the correct buttons (though his formation switch to a flat 3-5-2 was questionable) and his man-management skills have appeared to be solid. He certainly should be given credit for where the Magpies sit now and likely he will not be the one to blame if the season ends in a raging tire fire.

Next: Who represented the EPL in the Fansided 250?

The fan base may dislike their owner but, they still love their club. For them, there may be some hair-pulling as they may get dragged closer to the drop as they start playing closer to who they really are.